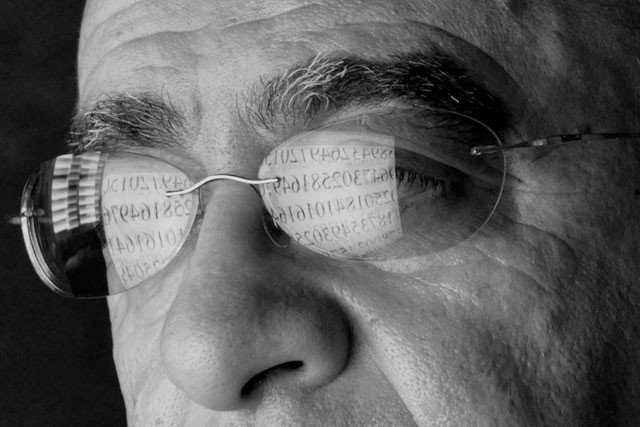 Elio Lutri was born May 23, 1953 in Lucca, the city where he still lives and works. He teaches technical subjects in high school and is the owner of a civil engineering firm.

His many passions include: sports cars, art, architecture. For years he has been using photography to express himself. He started in the dark room with black and white and has continued until the advent of digital, with which he has found new inspiration. 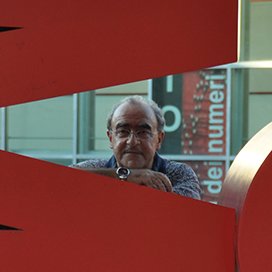 His great curiosity about the world led him to travel. A traveler easily recognizable in any corner of the globe: comfortable shoes for walking, a trusty Nikon and the well-worn Moleskine in one of the many pockets. Accompanying him almost always, his wife Paola, partner with whom he shares his life and passions since 1976.

He discovers multi-material art only in 2007 and it immediately becomes a new passion. A passion derived from the study of new themes and new materials.

“For a lifetime I worked for the ‘others’. I did it and I continue to do it with all the dedication that the ‘others’ deserve when they pay a price for it. However I am now able to work for myself. And in a few years it all came out as you see it. All in all, I love it, because this is by far the best gift that I could ever give myself.”

Nothing he creates is improvised or instinctual. Everything is patiently and meticulously studied.

“I trust more the mechanics than the chemistry. I much prefer the eternal security of a screw to the uncertain stability of glue. The important thing is to find, from time to time, the right one, the one that plays its role without demanding “visibility.” 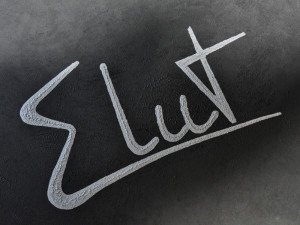 “I’m the worst critic of myself. Until I reach the result that I had in mind, I do not put the final seal which represents the end of the work and its consequent visibility.”
His versatile and multi-material art, applies a modern approach the original concept of overcoming the two-dimensional surface through his 3D paintings.

“It is easy and natural for me to find the right composition that better expresses my ideas. The hard part comes later, when I have to study how to firm up my ideas of materials on a flat surface.”
His work is a playful combination of numbers and materials, which define a new “grammar” of numbers. The author reinterprets the numbers, not for what he is forced to say but for what it allows us to say. The effect is surprising as a result of this unexpected combination, reinforced by colors and shapes to highlight some existential themes. The style is that of the self-sufficient language that draws on the author’s mythology.

“My life has been governed primarily by numbers. I have had to rely on them to have certainty about the quality of my work. Numbers, algorithms and electronic devices were my main workmates. Using them I have designed shapes and texture with different kind of materials such as brick and wood, steel and reinforced concrete. With them I often consolidated and rejuvenated the old and tired structures of my city. I used to teach something about them to my students and to these numbers I had to entrust to assess their capabilities and commitment”.

The artist came to this method for an internal need that could not be brought forth in a classic painting but can be expressed in a work where the materials that constitute it become the most important and innovative part. 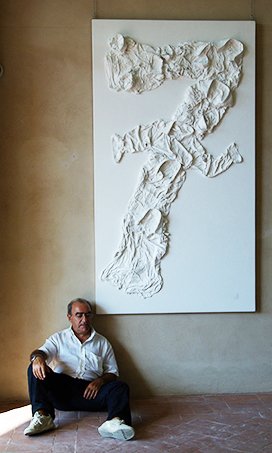 “I like to use color in a substantive way. I often use natural products such as ochre from the quarries of Roussillon or indigo purchased in some Middle Eastern market, other times I rely on more natural colors of earth or sand. The red clay tennis courts, sand coming from the most diverse places in the world, from the Sahara to coral reefs, from the nearby Tyrrhenian to the volcanoes of Iceland”.
In some ways the author is related to the simple and conceptual art due to the casual use of diverse materials. But it does so with a distinctive and more intimate approach which differentiates him form the theories that originated form the “Arte Povera” movement.

“I love to give new life to old objects. Things that have been used in the past and now lie forgotten in some remote corner of a house or an office. Most of the time these things have a history, sometimes real, sometimes imaginary. When I see or pick up an object, it is as if they told me something about themselves. It is precisely that “something” to which I try to give form and content, while leaving these objects as the main subject of the narrative.”